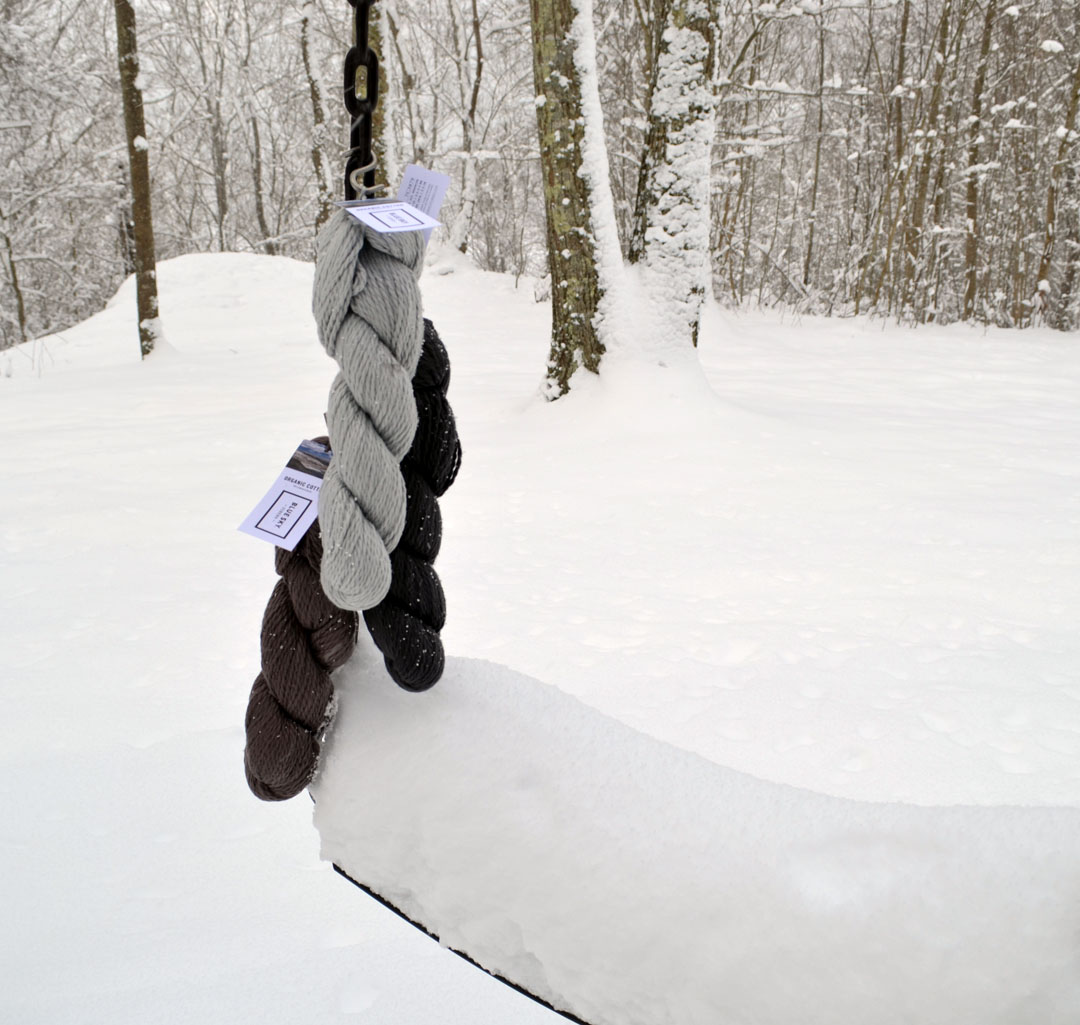 I’m absolutely ecstatic! 100 releases! I never thought my design career would be so plentifully blessed with creative designs as to reach 100, but God has given me so many fiber-y visions, today we celebrate that milestone and look forward to even more to come. If you’ve been following along on Puddles 100th Pattern Dash Event, remember to pull out those two secret words and use them as a coupon code on Ravelry. Not on Ravelry? (Or forgot to write the codes down?) Drop me a line with your receipt and Puddles will send you a note of reminder ?.

In addition to marking 100, In Motion has a fun story of its own. In Motion was originally designed as my class project for “A System of Grading” by famed fashion professor and knitwear designer, Jill Wolcott. As an added bonus, celebrations will ring forth as I check off this exam as finally complete with the stroke of publication! In the next few blogs, I’ll be looking back at the course and sharing some of the things I learned, including my own sizing chart.

The course began in 2017 and I started batting ideas around for my course project over the Christmas break. The first sketch I saved was from early 2018, so from concept to completion, a 2 year process… nearly to the date!

After the basics of the sketch were complete and the second module was underway in the Spring of 2018, my design started to take more shape. Hehe, notice my biggest hang-up… that big question mark. Yes, for this design, deciding on the stripes and shape, fit and length, where the easy part. But the neckline options had me fiddling for months! 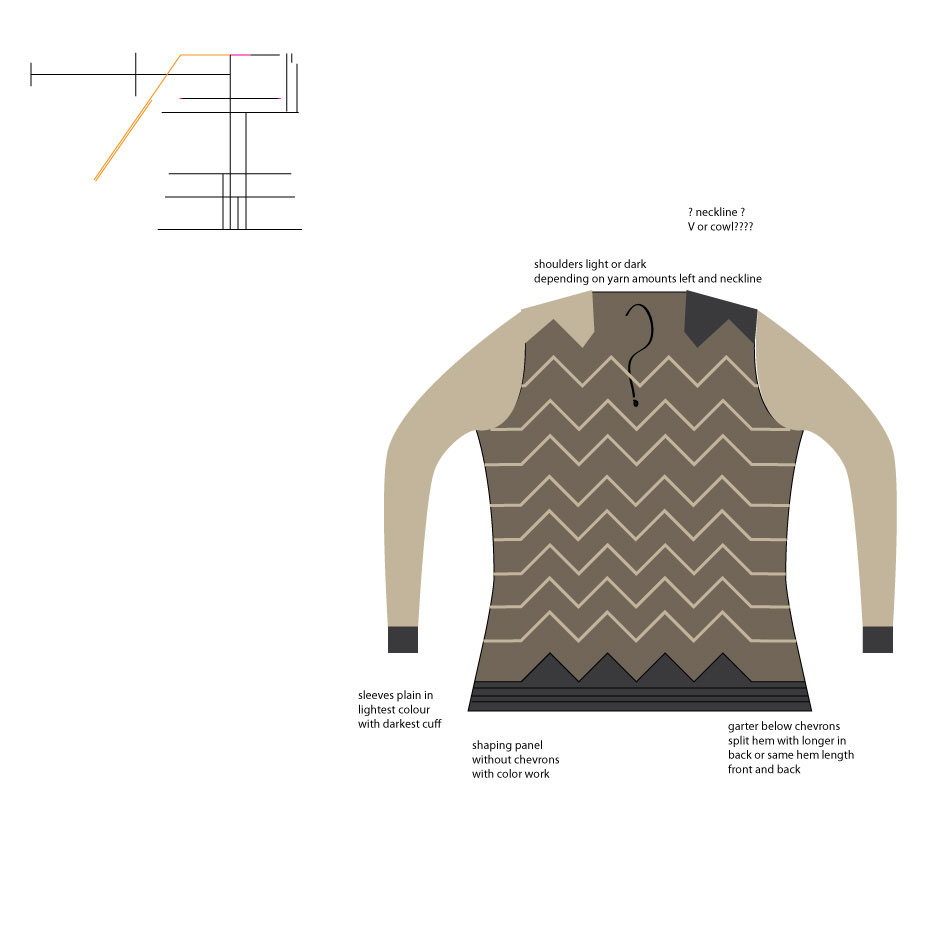 From sketch to swatches, there are lots of fun ways to create chevrons, but what way did my sweater want to be? With some Brightwater Upcyple yarn leftover, I got to swatching, playing with the chevron shape as well as deciding upon surface texture. Several swatches later, these details took shape. 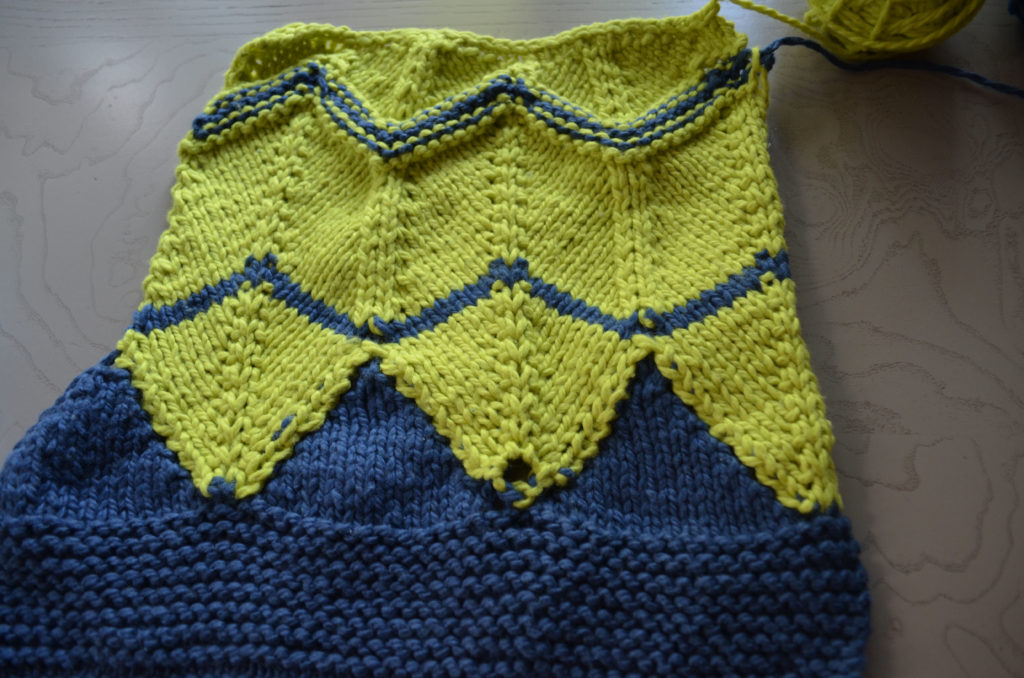 Camera dad surprised me with a SQ of organic cotton worsted weight yarn for Christmas 2017, for this very class project. 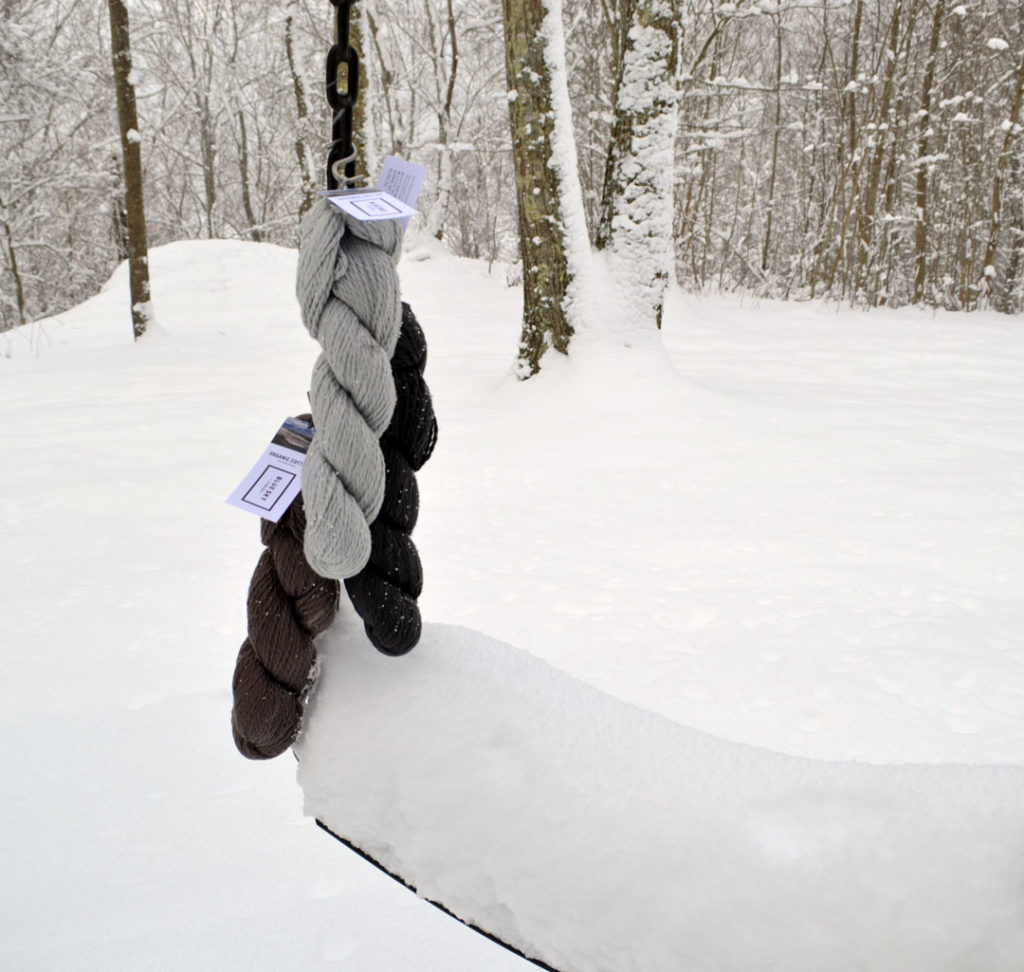 I got a film of it blowing in the wind too 😉

Prototype cast on began in early April 2018… the evening to be exact ?. 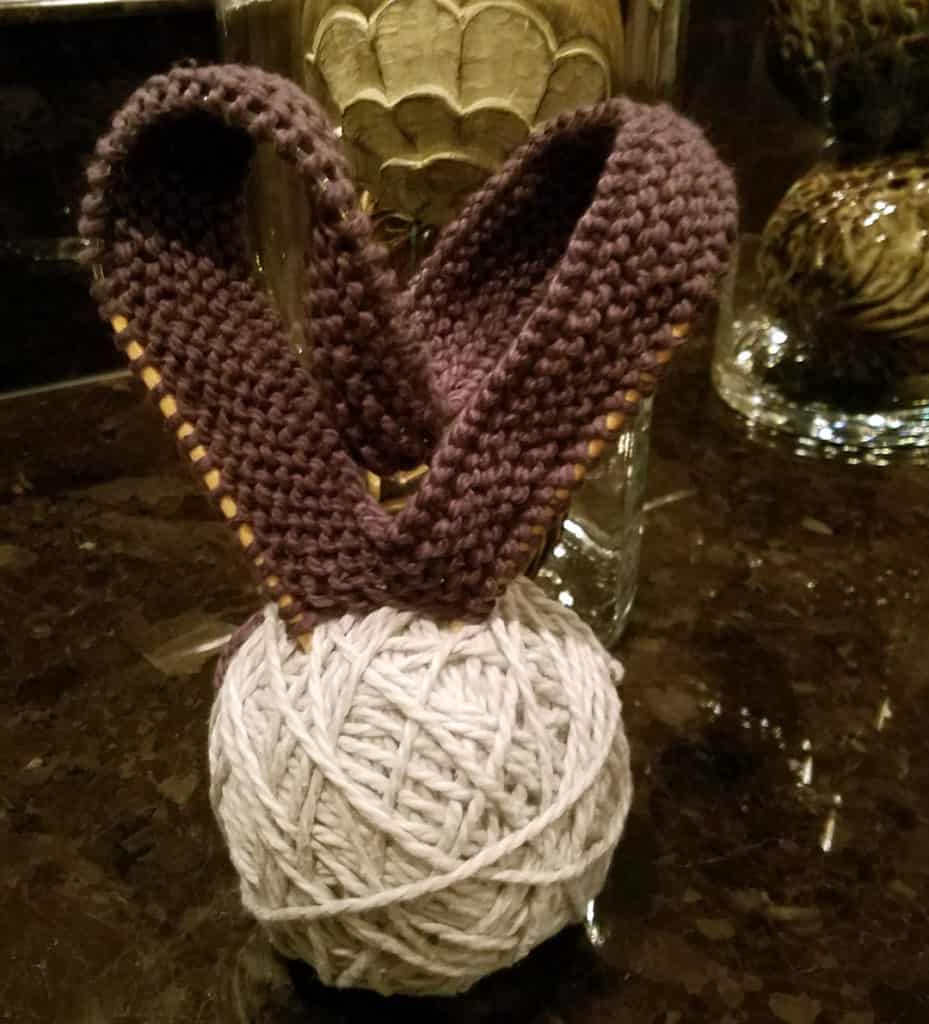 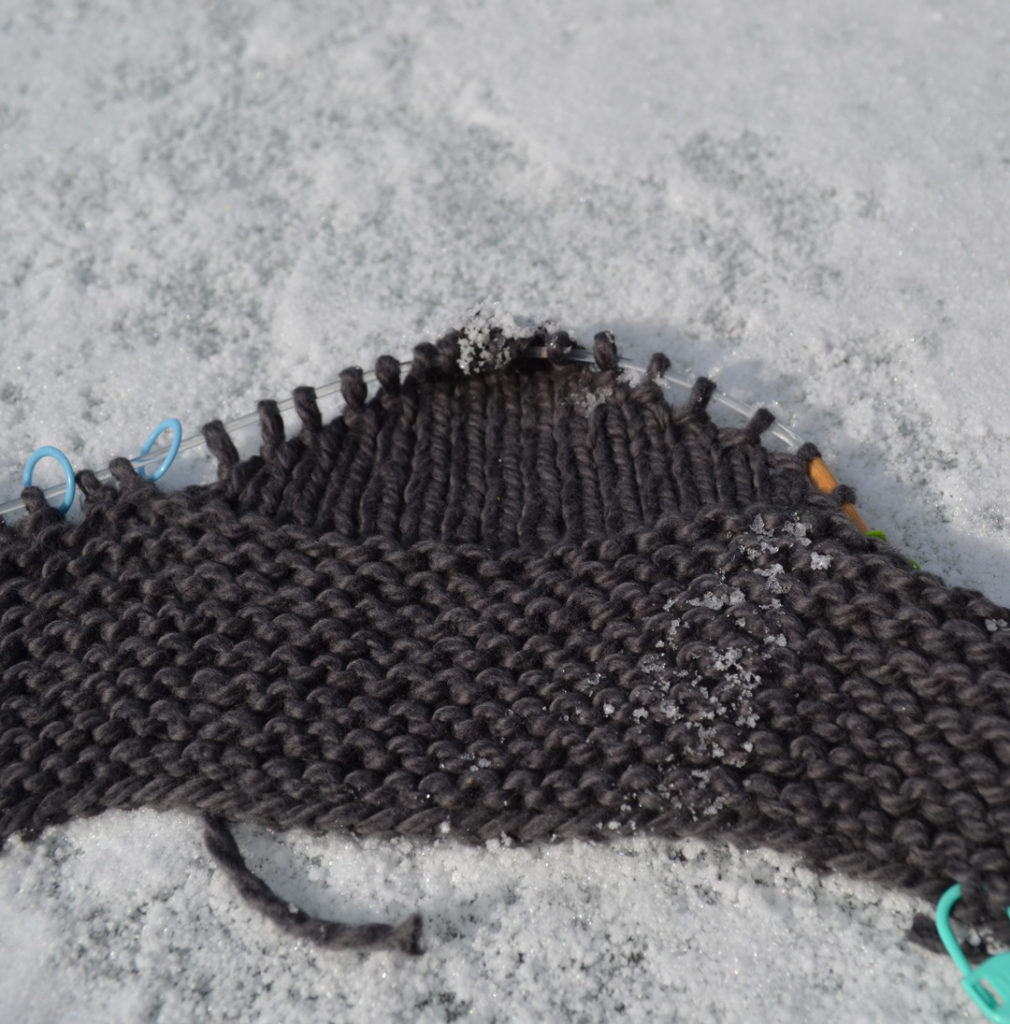 2018 apparently was a year for a lot of very late snowfalls so with all that extra knitting by the fireplace, the back was complete by April 17th. 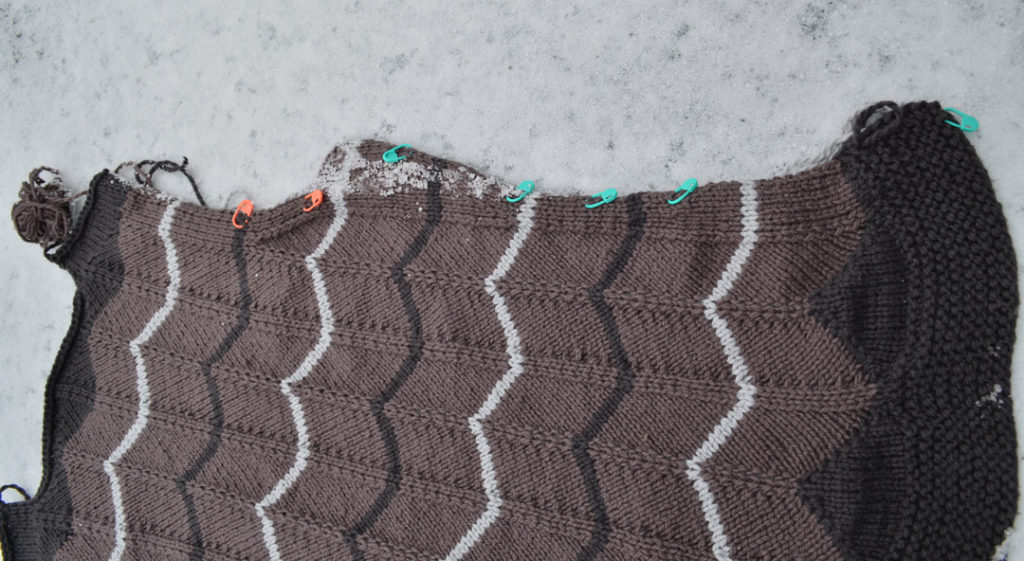 A month to the day later, the final sweater – front, back, and both sleeves – was laid out for it’s pre-wash measurements ?.

Yes, I leave my stitch markers on until after I finished seaming so I can ensure everything lines up. Since I write my patterns with “row” numbers and keep ‘’/ cm for those substituting yarns with different row gauges, I place a marker at the beginning of each pattern subheading so can easily count the dozen or so rows and ensure perfect and an equal job front and back (and sleeves ? ). 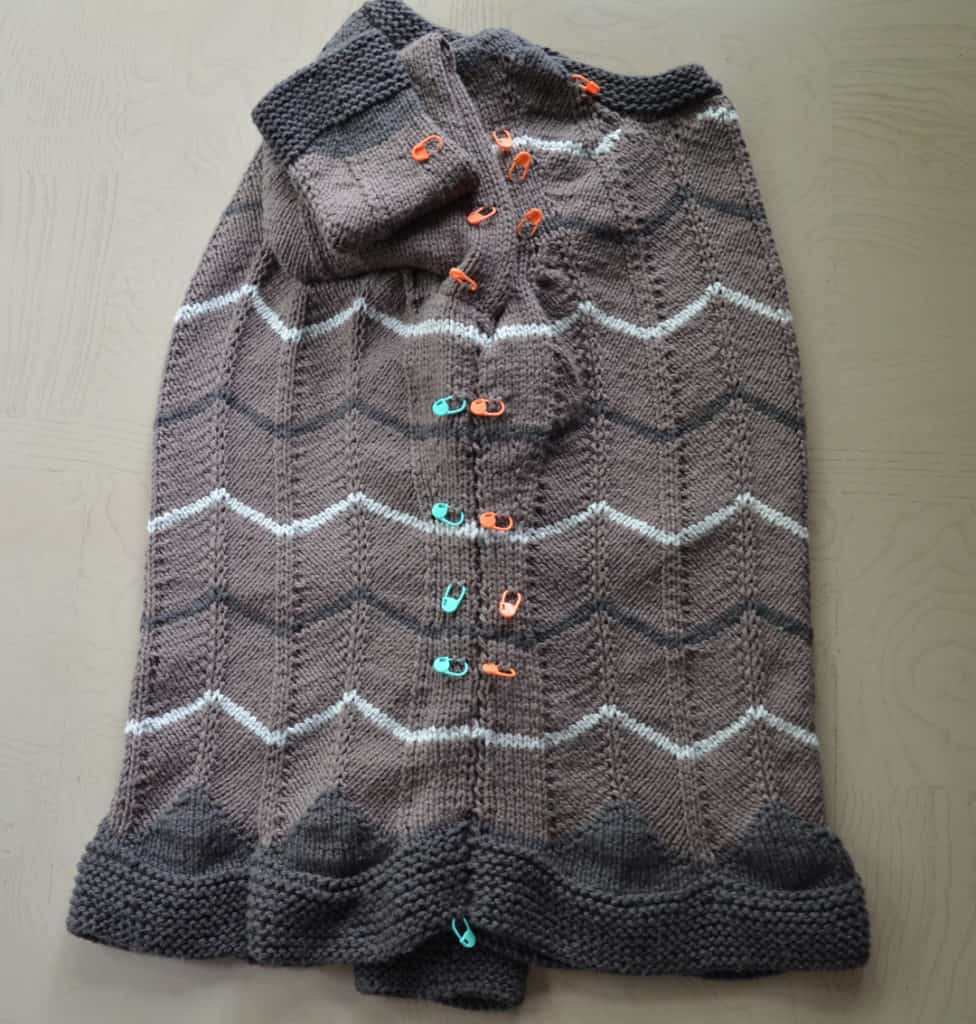 Off to tech editor, number 1, and post for test knit… and then the breaks hit, hard. I put the test on pause and went back to the needles. Little did I know this hiccup would take a year to suss out. 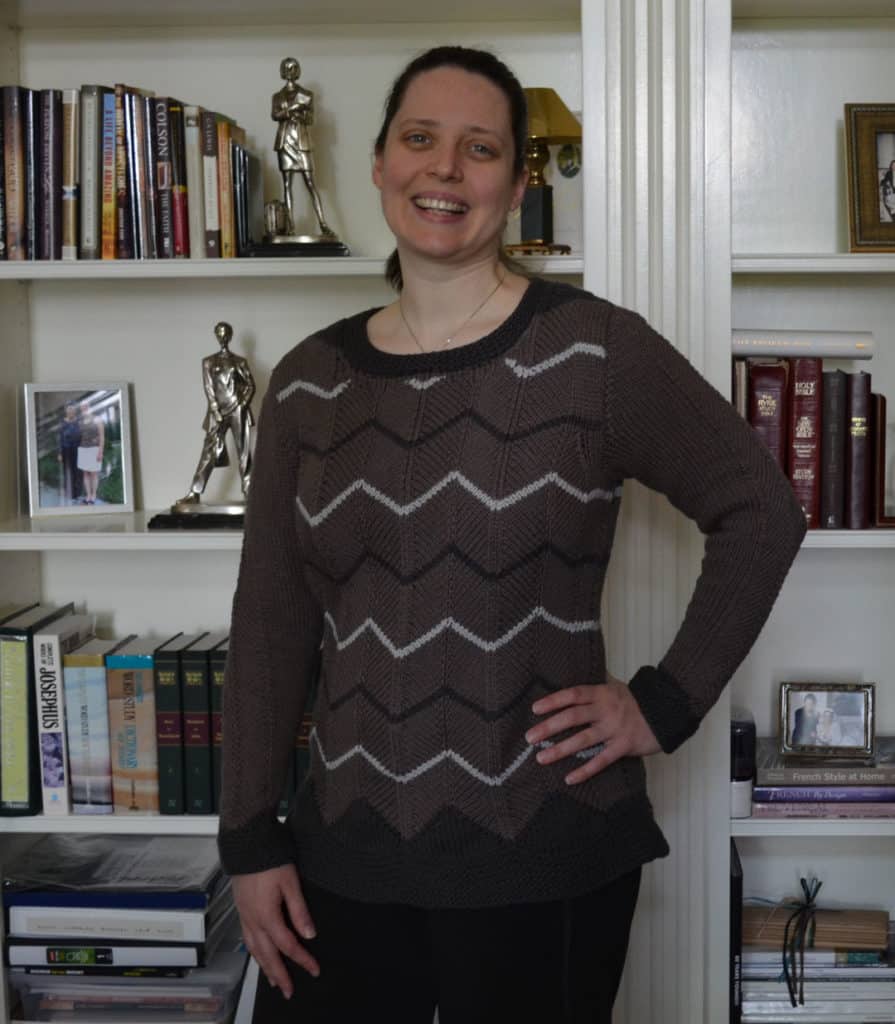 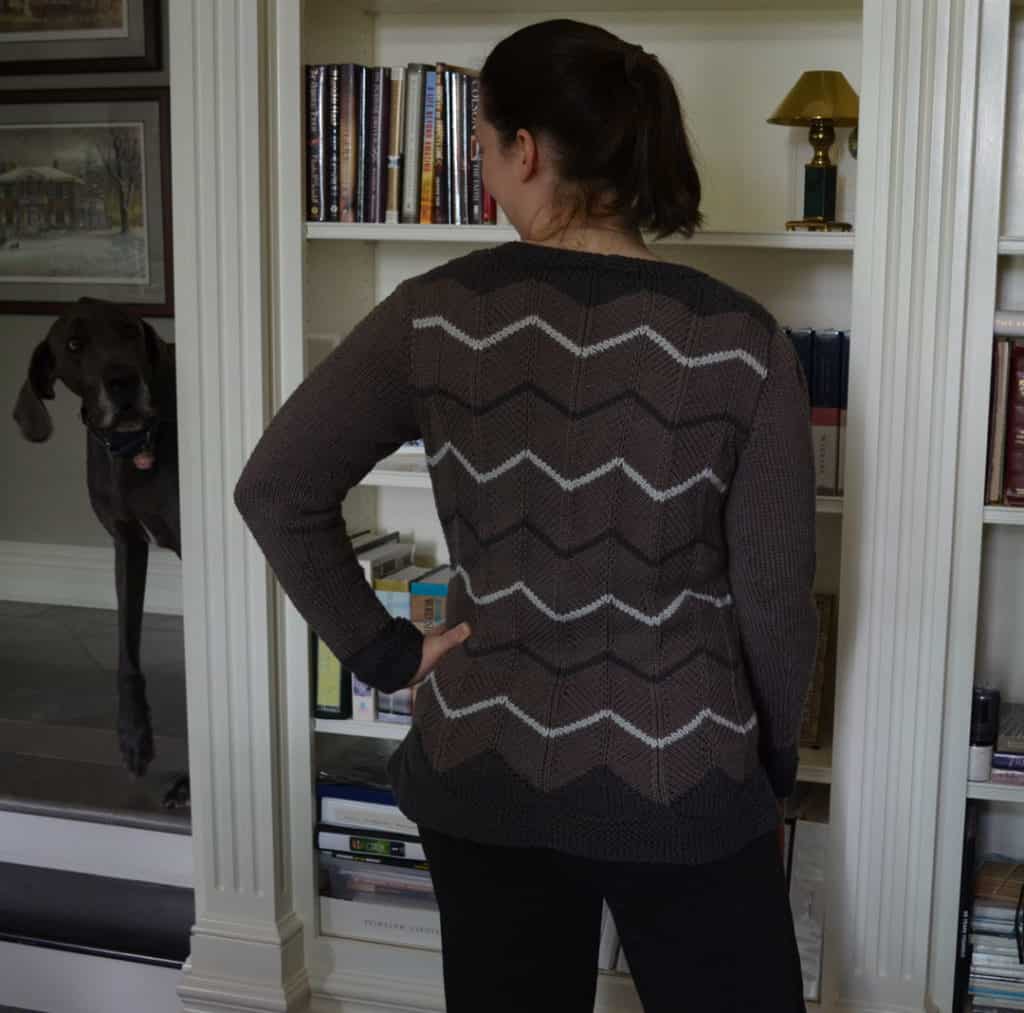 “Don’t sit down and think about what to write, sit down and write what you thought.” I received that advice as an author and it is advice that has carried me through many a design, too. I set the problem to the little grey cells and let them chug. They chugged, churned, and chugged some more.

In the interlude, they designed a cowl to make the chugging a little more fun. Remember Motivity anyone? 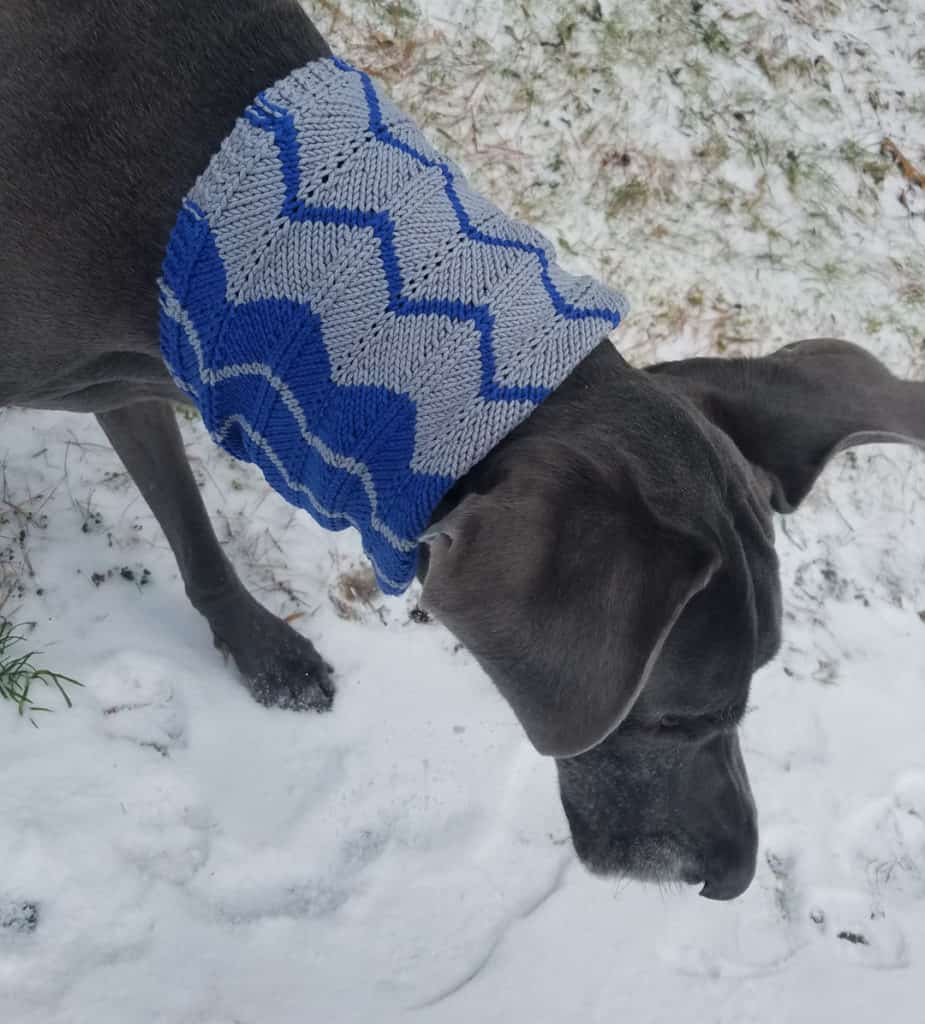 Creating that design solved the major issue with In Motion except for one little issue. The largest size at the underarm. I had the option of doing entirely different directions there, dropping the largest size, changing the number of stitches in the chevron, or letting the little grey cells stew longer until a better solution presented itself. 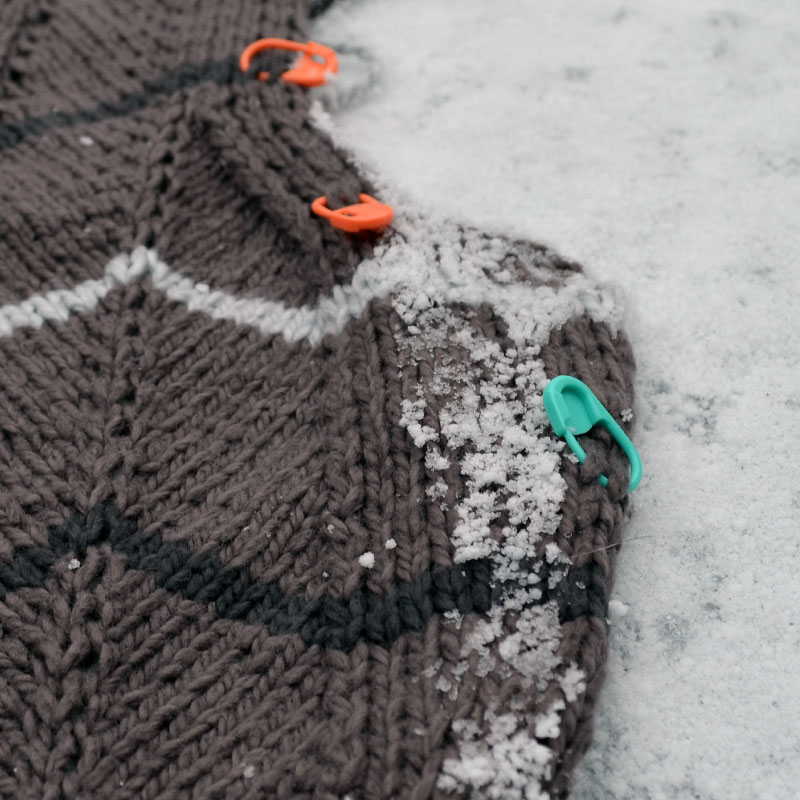 Also during the interlude we were blessed with the most amazing snowfall. I had In Motion blocked awaiting the perfect weather for the shoot and with a darling daughter smile convinced camera mom to stand in the garage and shoot me (and Puddles) playing on the driveway in the falling snow. 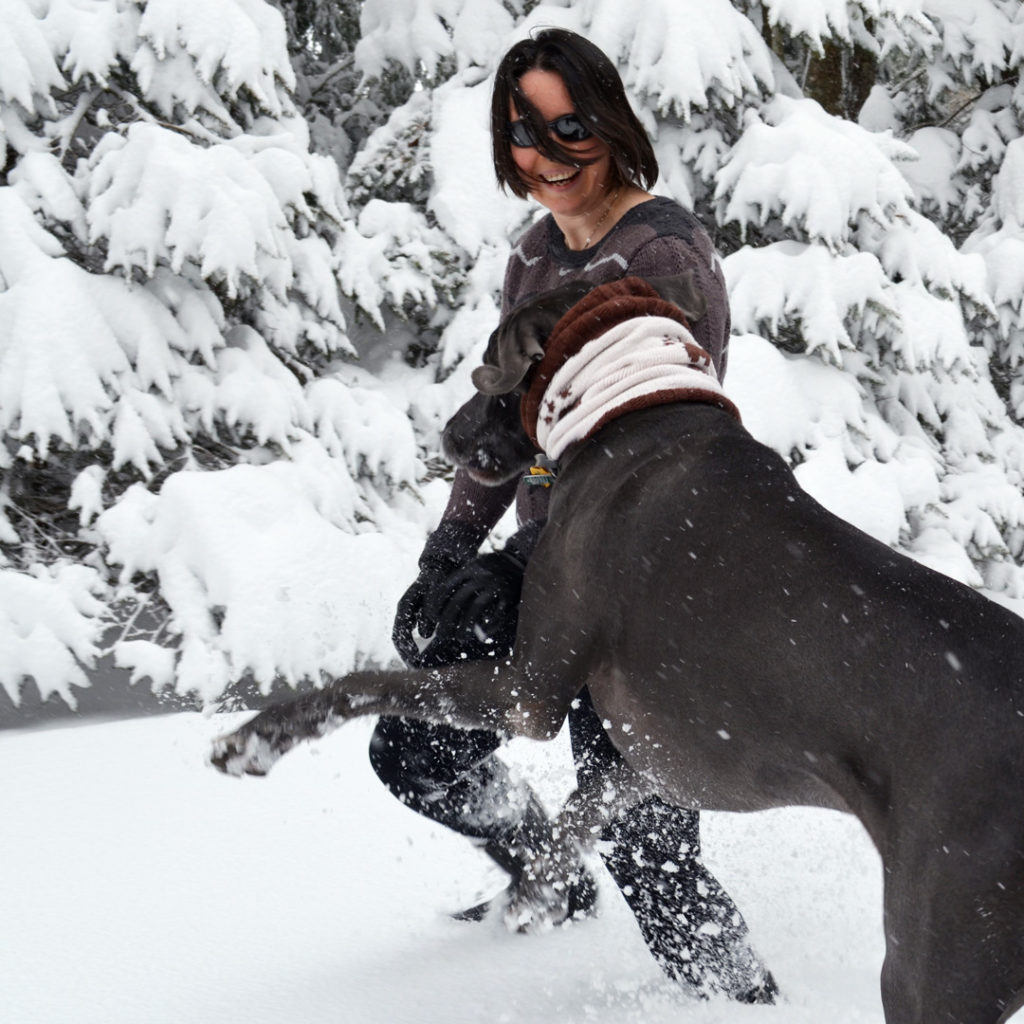 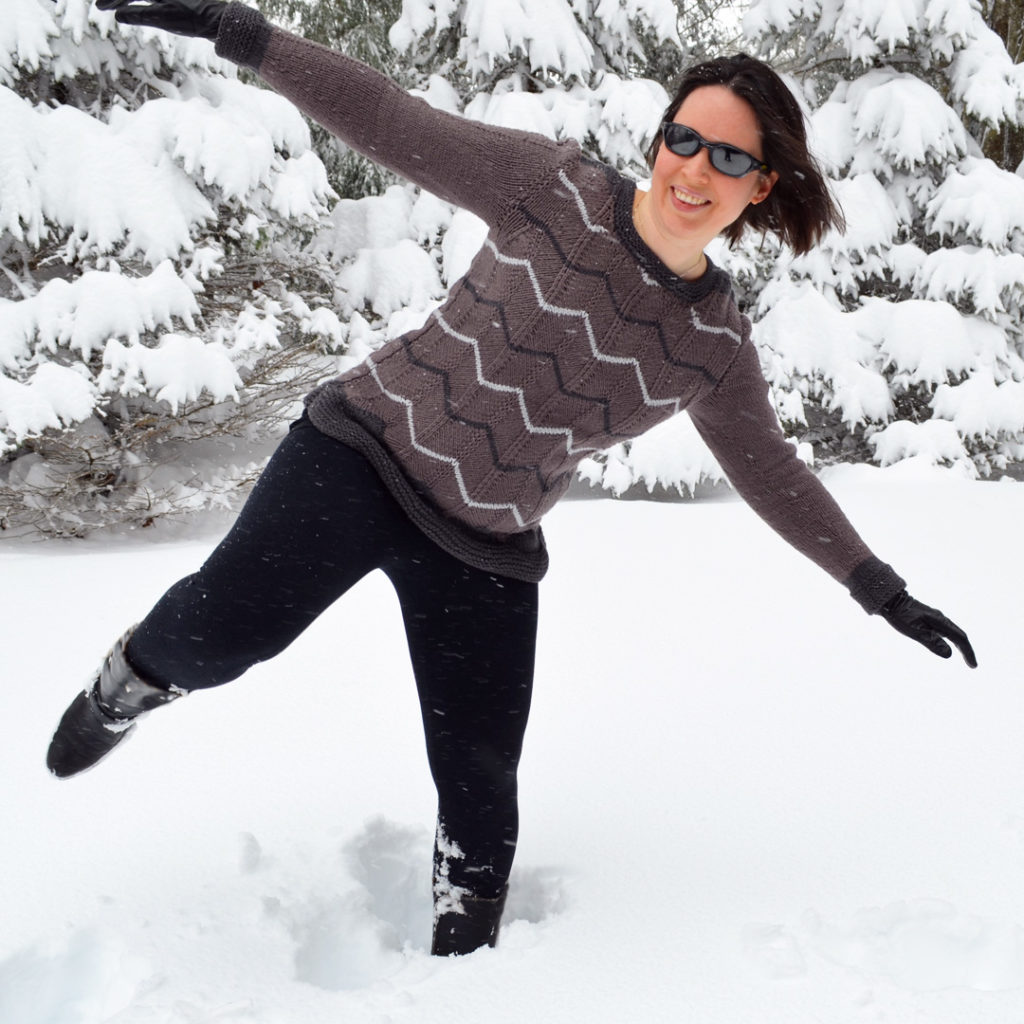 driveway as the shoot location, who would of thought? the snow was SO deep, yes, I did fall! 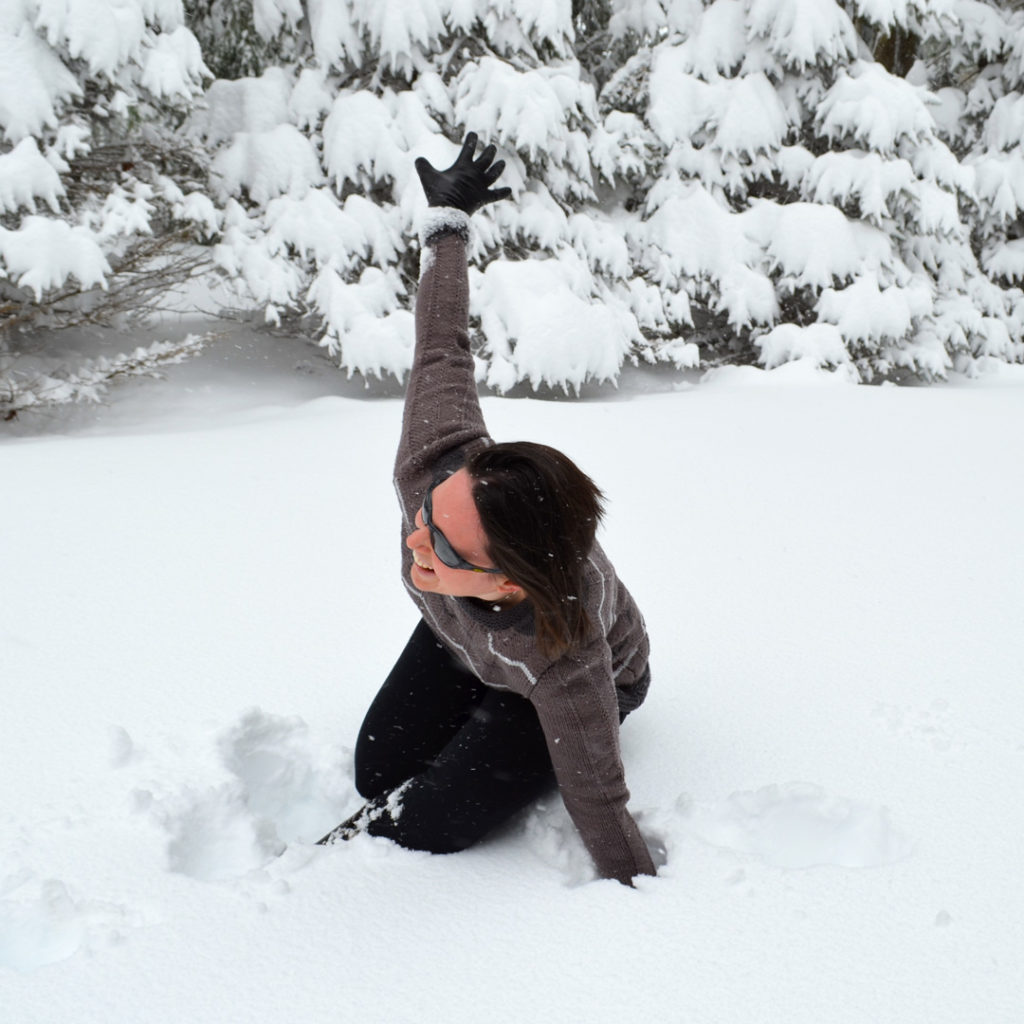 and laughed so hard!

The next day, we remembered to shoot the back ?. 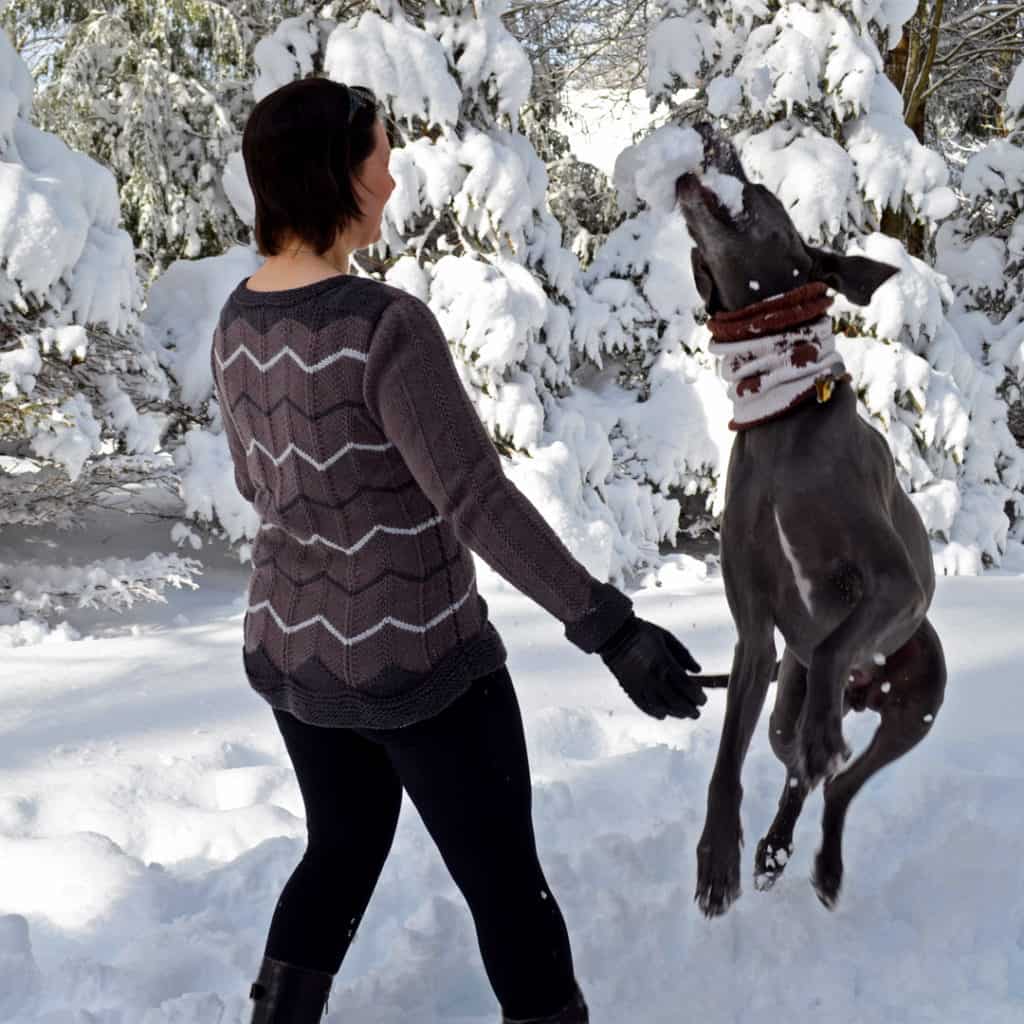 whoops, no falling snow, but still plenty of fun!

Finally after nearly a year from finishing my own prototype, the solution presented itself. Lacking confidence, I swatched out each size to verify the underarm and neck transitions… not what I’d learnt in my grading class – knitting every size, is the opposite of what grading is all about – but it was something I felt I needed to do for this one to ensure it was correct.

Then it was back to the tech editor… number 2 this time, in order to have fresh eyes and a test knit to confirm.

A few minor edits and it was ready for release! Having previously looked at my release schedule, I decided to make this one, number 100. It was the culmination of so many months of work, it deserved the triple digit celebration!! A bit of a delay with Unleashed, but so goes collaborations sometimes, and then a very sick puppy to deal with and today is the day. This year Psalm 90:17 has been my motivational verse encouraging me to bring this design finally to publication. I invite you to cast on your In Motion and celebrate this milestone with us! 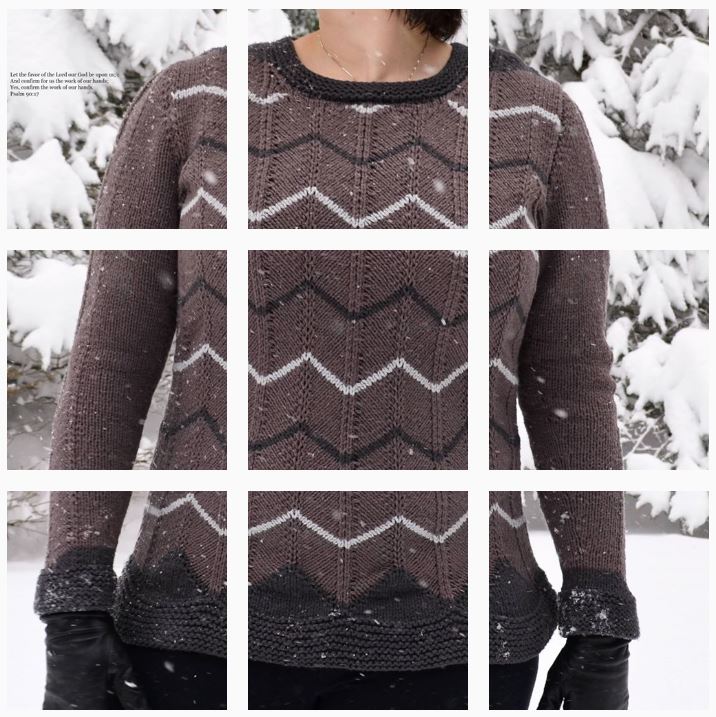