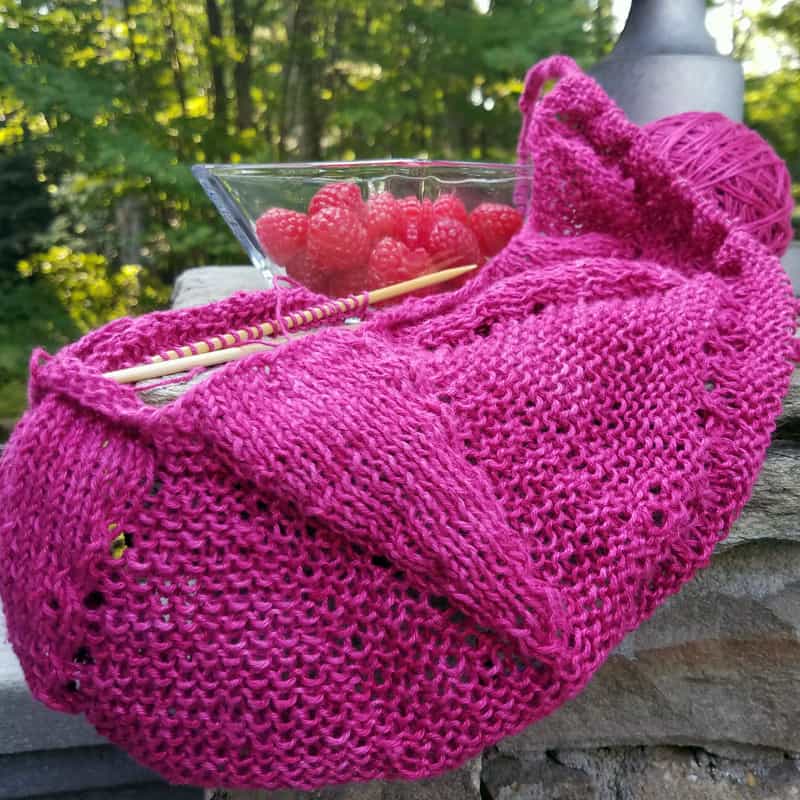 One of the unsung beauties in the process of designing is the morphing a particular concept goes through from the initial glimmer of an idea to a published pattern. The story behind Awakening took such an unusual path. In what other world but design would you find a FO that combines a rotting out tree hanging off a cliff, a fascination with drop stitches, dogged determination, and fresh coloured yarn that makes you want to wake up and pick up the needles before breakfast?

Rotting out tree –
Yes, rotting out tree. You all know how Puddles and I love to scour the woodlands in cold weather. One of our favorite haunts is this rock outcropping above an itinerant stream. There is something particularly inspiring about the decay on this old tree.
Seeing those “disappeared” parts that was the first twinkling of Awakening (previously known as Awaken, previously known as In Tempo), so much so I cast on that very week! (Let’s just say, that’s incredibly fast for me as things tend to marinade for months if not years before swatching).

Swatching –
The original concept called for dropped stitches so that’s what I swatched. After a few attempts I realized my beloved cellulous based fibers (and I tried a variety) lacked the “stickiness” needed to hold up that many drops, so some tinkering happened. As I tried out different possibilities, I discovered that Garter stitch provided the quintessential background, which emulated the texture of the drops while adding much needed stability!

Transitioning from the dark into the light (aka dogged determination) –
While the original was inspired by the decaying log, after swapping out the drops for Garter, the pattern was no longer visually representative. However, within finishing the first section, it was quite apparent what the replacement would be. It was like light shining in the darkness! Rather apropos as it was my “breakfast” knitting project.
Mom, I thought you said “breakfast” that looks like “dessert”!
Oh right Puddles… breakfast ?.

Sun Rising Small Size –
Sitting in the car with camera dad awaiting the rising sun, we heard the sounds no photographer wants to hear… rain hitting the window shield. Popping out, we shot as quickly as we could before the deluge, but missed that “sunrise” moment due to rain clouds overshadowing.
That rain cloud cast a shadow over the design that just didn’t shake. Perhaps it was the death of my grandma and the fact the large size was my “sympathy” knitting causing the design to hold too much emotion. Perhaps it was the constant and pervasive loss at yarn chicken, frogging, and trying again. Whatever the case, I knew Awakening wasn’t complete, but for the time being into the sin bin it went.

Until…
Ravellenics 2018 – “challenge yourself” – what bigger challenge than pulling that most difficult design “child” out of the sin bin and reworking the design until I had a large size within the yarn available! Within the two-ish allotted weeks, I had a lightbulb moment, redesigned the large size, and furiously stitched like Puddles had never seen me stitch before.
…and it WORKED!

Washed, blocked, and ready to shoot! This puppy was off to TE and testing while I waiting on the weatherman.

I did say wait, right? Here it is the afternoon after the third attempt failed to capture the vision. What vision? This vision…

thank you for modeling the glow, Puddles ?.

To meet my May 3rd goal of publish I had 1 last morning to capture the perfect real life sunrise. Today’s disappointment was arriving at the shoot location only to discover “road closed” within 100 yards of where we needed to set up to catch the sun. Monday’s disappointment was a surprise “relearning” that the sun rises at a different angle in May than in June, so the sun clipped the side of the mountain instead of shooting between two mountains at the original Small size shoot location of last year. So if you’re reading this on May 3rd – success!! If you’re reading this on May 10th – success… at plan B ?.

Linen from Eco Stitch! This amazing hand dyer works out of her home in the UK dyeing Belgium grown linen with eco dyes. I LOVE this yarn (and the color-savvy dyer behind it) and use it frequently! Diane, the dyer, implements many eco principles into her dyeing: she does everything by hand, skeins are air-dried, and when she chooses to use detergents (not all colors require them), she picks an eco-detergent! Check out her stunning hand dyed yarns here!!