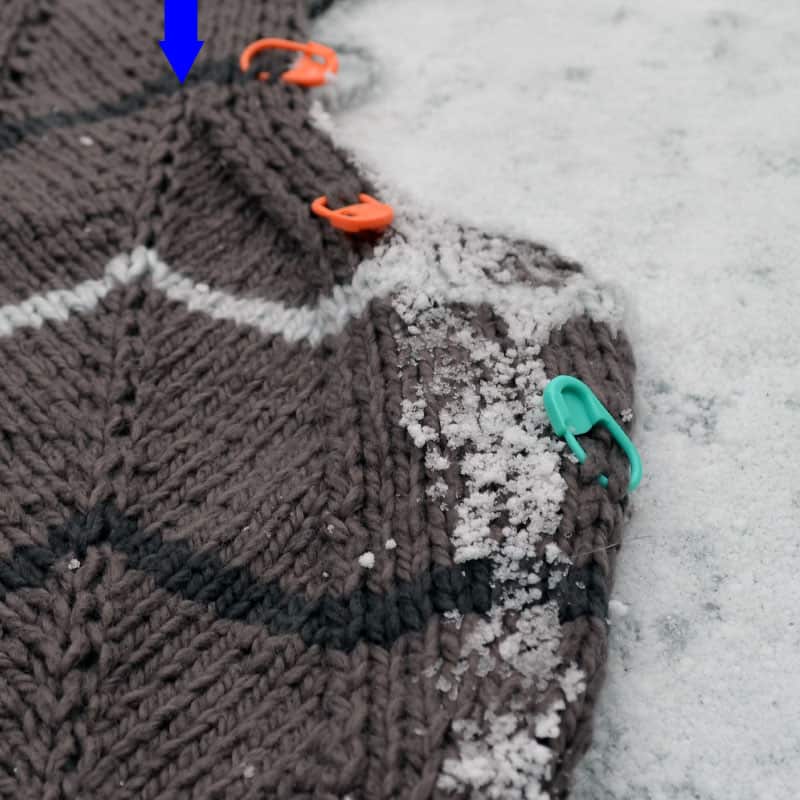 I begin each garment design with a philosophy for that particular design. The philosophy is what the garment wants to be and what, if anything, are “nonnegotiable” elements and what can be tweaked if needed. For instance, proportional design is an overarching philosophy I’ve always applied in my garment designs, even before hearing Jill mention it in her class. As seen in Woodsong Camber (pre-class), the philosophy of this design is that it featured differing sized traveling cables dependent upon the size being knit. Or in Moonlit Kiss, I originally had sketched in highly detailed sleeves, but in development found the lace and cowl details were enough elements for one design so streamlined those sleeves down to a simple faux seam to match the body.

Taking the course, I learnt that once you settle on the structure and fit of the garment, that too will impact the available sizes being offered! Case in point, In Motion. The size range, either end, is capped by the chevrons. On both ends of the scale offering a wider range of sizes wasn’t possible in this design. Either proportional chevrons would have to go, which is against my overarching philosophy. Or I’d have a garment with the same bottom as shown, but a different underarm and up or the same top as shown with a significantly different bottom. The math was the deciding factor on this one as the arm shaping had to end before the high point of the chevron!

Speaking of Woodsong Camber and In Motion, to round out this series of blogs on “A System of Grading” let’s take a look at the old and new method. Here is how Woodsong Camber was created… each size was drawn out row by row and the design placed and the transition of the pattern design calculated. It was a mash up of styles – art and calculation, but for each size individually. Then all these individual sizes where compiled into one pattern.

Similarly, for Color Flow, each size was drawn out and the math calculated using 2-D measurements.

Now for In Motion, I started with my standardized size chart and used excel to calculate the grade following the best grading methods. I admit, where the math started to play nasty, I reverted to drawing out the armscyes and swatching each size to confirm. But had I picked a simpler design for my class project, I’m confident, the whole thing would have been done according to what I’d learnt ?.

To summarize, the previous blogs have covered the philosophy and theory of grading covered in “A System of Grading.” I learnt a lot of practical knowledge as well from setting up excel to do the heavy lifting to some neat tips and tricks. These I consider more proprietary to the class so won’t be going into more detail. But rest assured I’ve only scratched the basis of the knowledge Jill shared in her course! I hope you’ve enjoyed reading this summary. Happy knitting!