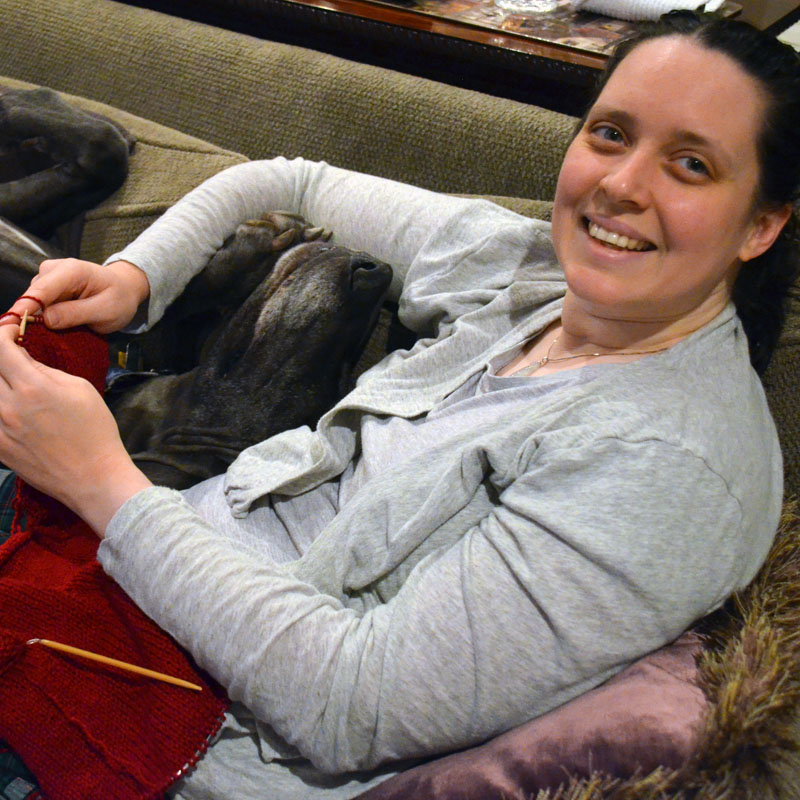 “I hate finishing!” How many posts have begun with that? Too true for me! So creativity got to work figuring out a top down construction method that didn’t require the finishing of “seam shoulder” pieces.

Another very important point was the need for a seam to stabilize the shoulder of the garment. Yes, a provisional cast on for the back and undoing it to work the front is an option for wool lovers, but try taking the stabilizing benefits of a shoulder seam out of a (fitted) garment knit in cellulous yarn… it grows and doesn’t know where to go! Reliance upon the neck and arm to hold it in place simply wasn’t enough!

So I’m happy to introduce “Lindsay’s Disappearing Cast On™” for all your seamed needs (where you don’t actually want to work the seam)! Tested and approved for cellulose and animal fiber yarns!

Using the long tail cast on (this creates your “disappearing seam”), cast on the number of stitches called for in the pattern. Using 3 DPN needles at once – long tail cast on DPN, yarn DPN, and “slip DPN” – purl into the front with first DPN (aka yarn DPN) & yarn and, instead of dropping the stitch from the CO DPN, slip it as if to purl onto the second DPN. Repeat this to create your first short row section.

Tip
To aid in preventing any lost stitches, consider using DPN blockers to cap the “slip DPN” either end. This is optional, I didn’t find it necessary with the Aran weight cotton. Additionally, you can use circular needles if you don’t have DPNs (or run a DPN short, like I did).

Once finished, the shoulders continue on with the pattern.

The “yarn DPN” and “slip DPN” stay at the top of the work waiting until you are ready to work those stitches.

Three Needles, Two Skeins
This version of Lindsay’s Disappearing Cast On™ is great for yarns that aren’t too heavy where you aren’t at risk of the weight of the second skein pulling the stitches off the set aside DPN while completing the working DPN. An early version of this technique is used in Marquise Cut though I hadn’t named it yet and did a bit more tweaking to the final version.
Like the Three Needles, One Skein version, you start by casting on your “seam” stitches. Then using two needles each with their own individual skeins of yarn you work the short rows along the cast on to create the triangular shoulder section.

At the conclusion of the cast on stitches, set aside one needle with it’s yarn (for ease, let’s assume you work the front stitches first and set the back stitches aside) and work the pattern front until the directions say to stop. When the back is ready to be worked, you all set to go with the yarn and stitches prepped!

So what spurred this top down construction method? Interestingly enough, it was a pillow I designed for our home years ago! I wanted to “faux” a piping all the way around so that got me playing with long tail cast ons and three needle bind offs with the ridge on the outside. Once the little grey cell’s started down that path, there was no turning back. It’s now my favorite trick when I deign to knit socks or pillows… or top down garments!

2019 Fiber Choice Update
If substituting a non-elastic yarn, like silk, try these mods to make your stitches flawless:
* Larger needle used for long tail CO. I went up two sizes for best results. If subbing fiber that is elastic or stretchy in nature, use original sized needle for long tail CO.
* On the internal stitches, (that is the short rows that land inside the shoulders), slip the first stitch after turning instead of working it. This will prevent having any excess fiber inside your shoulder cap when the silk fails to average out like cotton will.