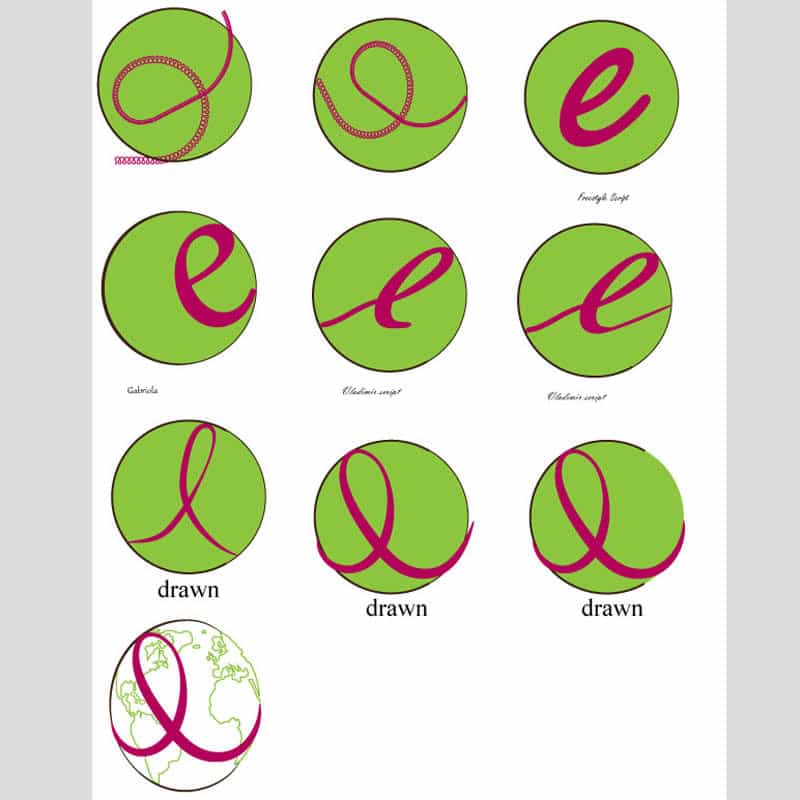 The blinking type line that currently taunts this still unwritten blog post fittingly parodies the arduous struggle that was the 2016 logo redesign. Despite the challenge, the redesign was something I knew was important. When I started working with Butterscotch Press (aka the best business coach for creatives EVER!) with the goal of making my business sustainable and supportable, I entered eyes wide open knowing monumental changes were on the horizon. After analyzing so many aspects of my business, from the designs, to the presentation, to the writing, the eyes of Yoda (aka Polly at Butterscotch Press) fell upon my logo. The analysis and prognosis, though extremely hard to accept, was definite. It had to go. The little icon I poured myself into creating a visually represent of what Knit Eco Chic was all about failed in one major arena – it lacked interface user-ability due to it’s visual complexity.

After a short funeral and period of mourning… okay, it lasted a bit & I really tried just to incorporate them into a new “container” in order to keep them. I was a willing learner, but with this lesson I just kept hitting the snooze button as I wasn’t ready to say “good-bye” to my organic cotton bush, hand made hands, tiny silk worm (my very first computer created knitting image), flax flower, and stalks of bamboo, all of which fell off my world of yarn).

I hit the sketch pad… both gel pen and paper as well as adobe illustrator.

Over the months (6 to be exact) and with Yoda’s continual prodding, encouragement, challenge, and support, I persevered… with a rather long interlude considering the concept of spelling out “eco” with all the letters stacked upon each other – brownie points for anyone who can still see the letters

…until I blinked and realized, this was it!

The color scheme:
Earthy brown and eco green pop with power pink. Power pink? Yes, power pink. Going back through my personal history pink was my answer to dealing with chronic illness. Wearing a pink shirt became code for “ya, I’m sick today, but I’m choosing to put on a pink shirt to make the world smile with me. I know this too will pass and until it does, I’m brightening up the atmosphere.” A wonderful day arrived when I wore a pink shirt for no medical reason at all. So now when I see pink, I see God’s faithfulness to give what we need in order to glorify Him in all circumstances. Power pink’s role in the Knit Eco Chic logo is praise, edification, and remembering past blessings while looking to future adventures… including those knit on the cushion of a sofa with a ball of eco yarn.

The ribbon swoosh:
Indicative of so many things – the script letter “e” for “eco,” the laid back therapeutic side of knitting, a twisted knit stitch, as well as a spin on awareness ribbons – all rolled into one mouse drawn swoosh across the colors of earthy brown, eco green, and power pink.

The shape:
The great debate was between a soft edge square or circle. The circle evoked knitting imagery to me more so than the square, plus it enabled this new logo to surpass the limitations of the original (and the original’s remake). Psst… keep your eyes peeled, there’s no telling where this logo’s gonna pop up next!

Thanks for taking the time to read about the new Knit Eco Chic logo! I’d love to hear from you so drop me an email or comment below. Happy knitting!