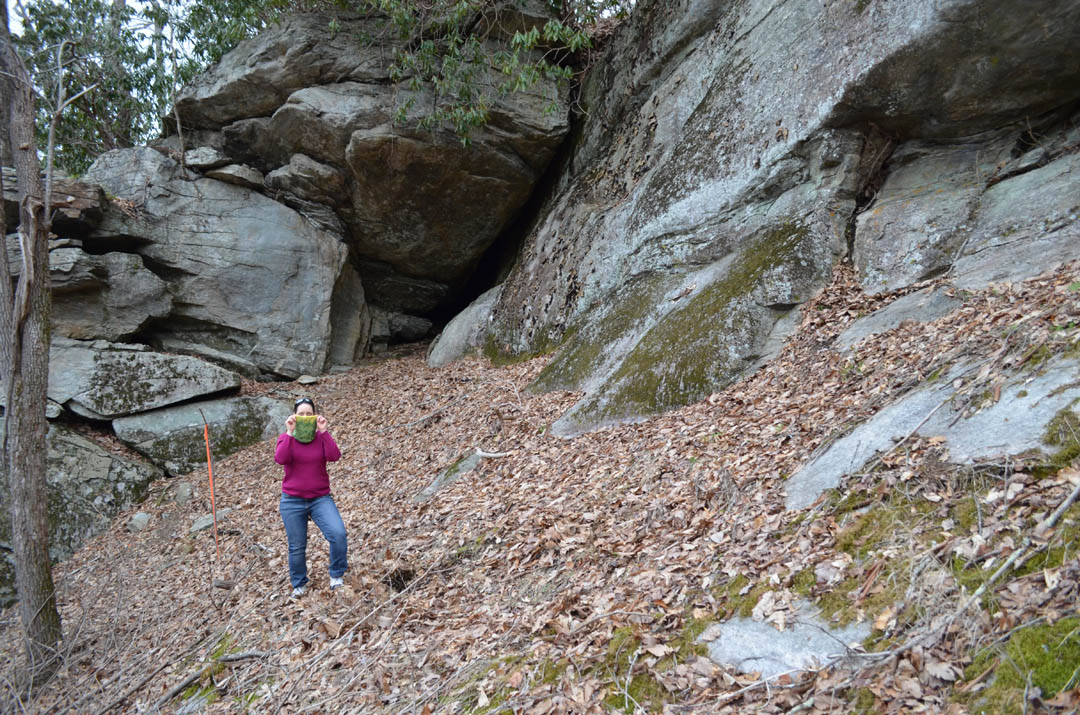 The weather turned on a dime here from winter to spring and with it the “blue ridge haze” appeared for two weeks without a break.  So, ever optimistic, camera mom and I went for a nice 2 ½ hour drive along the parkway looking for the quintessential mountain range background.  Unfortunately, each view through the camera lens was replete with interfering air particulates.

(Turns out viewing them on the computer, two locations proved to be great spots. Rain was forecasted on the next photoshoot day, so we decided to stay close to home.)

This location epitomized the look I was wanting for the pattern.  It didn’t look too steep, so I headed in with my heels on.  Halfway in I realized how far I was sinking in the soft earth atop the rocks.  So after a quick switch to boots, I scampered in from the other side.  However, health is always first and foremost so as perfect as the location was, it turned into a get-out-fast situation!  After 2 climb in attempts… 0 useable pattern shots.

Don’t take your geriatric mom rock climbing to get the name for this cowl, instead take the scenic route.  I want to point out that we DID try the “easy” method first!!

Camera mom drove the Mini up the grassy offroad as far as the divots would permit and parked.  Out in the distance, something caught my eye.  It looked rather like a rock formation!  So instead of turning to hike up the grassy offroad to where we shot Boscage, 5678 Cowl, and Vegan Woolies, I said, what about that there? With a groan, camera mom followed as we headed off “into the unknown“…

A quick aside: the original name was “Elevated Reflections” but last week when I had a question on “Coastal Reflection” it dawned on me that I’d already used the word so wanted to pick something else lest I get the “s” / no “s” confused.  Camera mom knew this as we’d been debating pattern names on our walks.

We forgot our hiking sticks as this mountain climb was completely unplanned.  Truly it was hard to gain an accurate perspective of its magnitude through the trees, but we continued our ascent.

Half-way up to the final photo shoot location, she exclaimed, “this is really Optimistic Elevations” and it stuck!  If only I could paint a word visual for you… there’s no way of getting the name confused with anything else.

We made it! Camera mom directed me over closer to the rock face. Perhaps I should have used Habakkuk 3 or Psalm 18 “hind’s feet in high places” as the verse for this design… then this might not have happened.

After being bit scrapped up while a tick took a walk on my hand (EWWWWWWWW), it even more cemented the “Optimistic Elevations” concept of the design.  Camera mom was shooting on the other side of the craig and hadn’t realized how far I was actually falling. Focused on being the consummate photographer and thus setting aside any maternal instincts she persisted in hollering, “smile” “why aren’t you smiling” “you need to smile”… which made us laugh all the more!

What adventures will you have in your Optimistic Elevations? Do share!