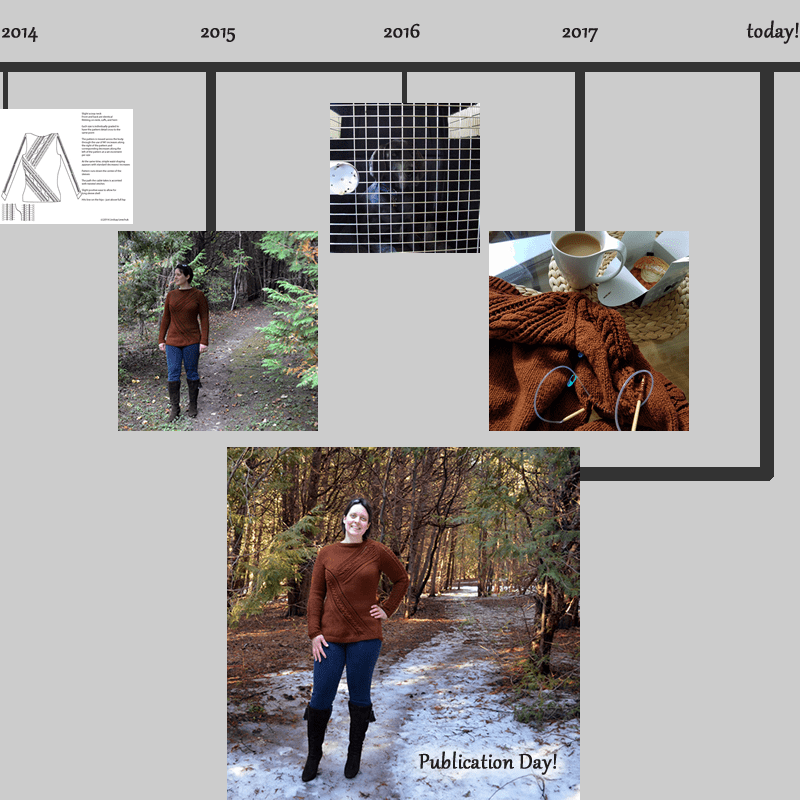 It’s a behind the scenes timeline look back at my design process. I shorted it to highlight the important stages, but it is as long as was the roller coaster adventure behind the design. Enjoy!

2014
Be careful of the working titles you pick! When I began “Camber” in June 2014 I had no idea the ominous effect naming a design “camber” would entail. Inspired by a design call from Twist Collective, I sketched and swatched the idea for a fitted sweater with traveling cables into life. In retrospect, a blessing, but at the time disappointing, Twist rejected my submission so I moved on to stage 2 – self-publish.

Cascade Yarns (thank you!) took a gamble on this “unknown” designer with 0 history in garments after seeing my submission and offered me an SQ of Luna in Cocoa 740, their most earth-friendly non-animal fiber yarn, which unfortunately is now discontinued. The rich hues of cocoa brown with underlying red tones fit the submission to a T. Excitedly I set to work!

Designing “on the needles” resulted in a working prototype and medium sized pattern in a few short months! Next task, a venture forth into unheard of new territory for me, grading… da da dum!

2015
Feeling adventurous I graded in 11 sizes! …and set it off to my TE and got a note back, “very hard to follow because the stitch patterns are so far away from the instructions.” I had separated the pattern into different sections to make each bit of the extremely complex front manageable. BUT in doing so I assumed that knitters would be flexible to this atypical layout, which my TE informed me was not the case.

Over the next several months I worked with the TE to rebuild the parts into a standard pattern format. With each homogenization of the parts the difficulty increased as the tools needed for that particular section were not right next to the section. However, we worked through it until we had what we thought was a test knit ready pattern. Unbeknownst to us, our concentration of looking at big picture, small picture in such a long time period, made our brains familiar with the overall structure… something I discovered wasn’t the case for people seeing the pattern for the first time.

Aside, one of my unwritten rules is to publish patterns no more difficult than an intermediate level… regardless of what the FO looks like, the writing style accommodates everyone who is daring to trust me, pick up the needles, and follow along. Sometimes, like in the case of the non-repeating Solar Flare Circular shawl, stitch by stitch results in an amazing FO! Other times, well it doesn’t.

Around this same time, I went on a trip for treatment to Ontario – my home and native land. While there I shot “Camber” along the beautiful trails of Woodsong B&B! Omen 2 for this design… when we returned to the States I discovered nearly all the photos were out of focus.

Undeterred, I posted the test call and to my delight several testers of varying skill levels signed up for this uniquely designed sweater. Then it happened… complete and utter FAILURE. Mind you, this failure wasn’t the testers’ failure, it was my failure. The pattern was too hard.  Two wonderful (& patient) knitters managed to finish, but their struggles told me, despite the months working with the TE, that the pattern wasn’t up to face the masses. Emotionally spent, it went into the sin bin… and stayed there!

2016
Happy New Year… you know what they say about “auld lang syne” – well this design was beckoning me from the sin bin. I’d learned a thing or two and found a new TE who could bring fresh eyes to the design. Her advice, simplify!

… and back to the sin bin it went. “Dog with bone mentality” – my vision must be met!

Hehe, never say never! I started working with a craft business mentor (for a myriad of non-“Camber” related issues), who also happened to be a TE. We talked about the design, I sent it over and her advice – simplify! With 2 “fresh eye” TEs saying simplify, I knew I better listen.  This time it didn’t land in the sin bin, just in the “to be worked on later” pile. While I soaked up all kinds of business, knitting, craft, and marketing information, the little grey cells chewed on the design. Turned it over and over and slowly a plan of action began to form in my mind.

With fresh perspective, I set to work. Immediately I saw my pattern repeat and knew where I could simplify without interrupting the integrity of the design! The original called for 3 sections of short row cables followed by short row cables every other cable. In theory, easy. In practice writing it out for 11 sizes where slightly different things are happening, not so much! With the flexible attributes of yarn, swatching it proved that even though the math required my original short row slope, the actual real-life differences were negligible when that 2nd short row was skipped. Score one for simplification!

The second move to simplify was to drop the sizes being offered… I admit I hemmed and hawed and got all tons of conflicting advice from designers, knitters, friends, and co-indies. But one thing I had learned in the time lapse since starting was fit – larger sizes often require special techniques that were incompatible, from a difficulty view point, with what this pattern could take with its structure.

The third move to simplify, a little design fudge – I took out an extremely difficult technique and replaced it with an easier one that didn’t affect the final look of the garment. This compromise removed the hardest element of the pattern! The original cable slope was set on a specific angle line. However, when the grading was applied the line went a little wonky due to the different number of stitches and rows being traversed. By making the small adjustment of doing a few repeats straight up at the hem on a couple of sizes and breaking the new size range into two groups, two slopes were created that all sizes fit into.

The fourth move counts more in the range of a design edit rather than a move to simplify. I found the neckline too high so bumped that down to more of a crew neck style. Also, I was always irked by one sleeve looking a little puffed and the other setting in beautifully, so I swapped bottom out sleeves for top down sleeves. This last bit took a lot of convincing from my mentor, but now I’m happy I did it. It also required a frogging and reknitting of the top and sleeves… this I dreaded and decided it needed to go into the sin bin again.

And this was the end of my original “time line” blog… so what happened next?

Hear that sound, it’s New Year’s again! The above rewrite took us into our present year, 2017! March 2017 I was blessed to return for treatment and further blessed by staying at Woodsong. Sitting beside the frozen lake after treatment I finished reknitting the neck line and top down sleeves of “Camber”. Gleefully I modeled on the deck and asked dad if we could try for a proper photo shoot… same location.

He said yes! This time, some were still out of focus, but most were in focus! At least the sweater is in focus, my face, not so much, but I’ll take it. And to add blessing upon blessing, it snowed and back on the trail where the sun shines less, stayed so the background was exactly what I had envisioned!

I lined up a test knitter in whom I have the utmost confidence and began the search for a TE. Fresh eyes are so very important when it comes to this. Several months went by because of, well life and health, and autumn rolled around. It went through a couple of back and forth emails, where I was most grateful for the fresh eyes. I’d assumed things previous versions spelled out that didn’t make it to the rewrite, so a couple of drafts later it was set.

Test knit number 2 was promoted and we were off to the races again. And then a little hiccup… it took a month for me to straighten it out… working daily – of course it was at the most difficult section of the pattern, the transition between the lower and upper detail. This time I left nothing to chance and swatched out each of the 6 sizes to verify. The charts ended up in the final pattern so nobody would be left scratching their heads ?.

The fix took a while, but I got it done with the seal of approval from the tech editor and test knitter, which at long last brings us to today… PUBLICATION!