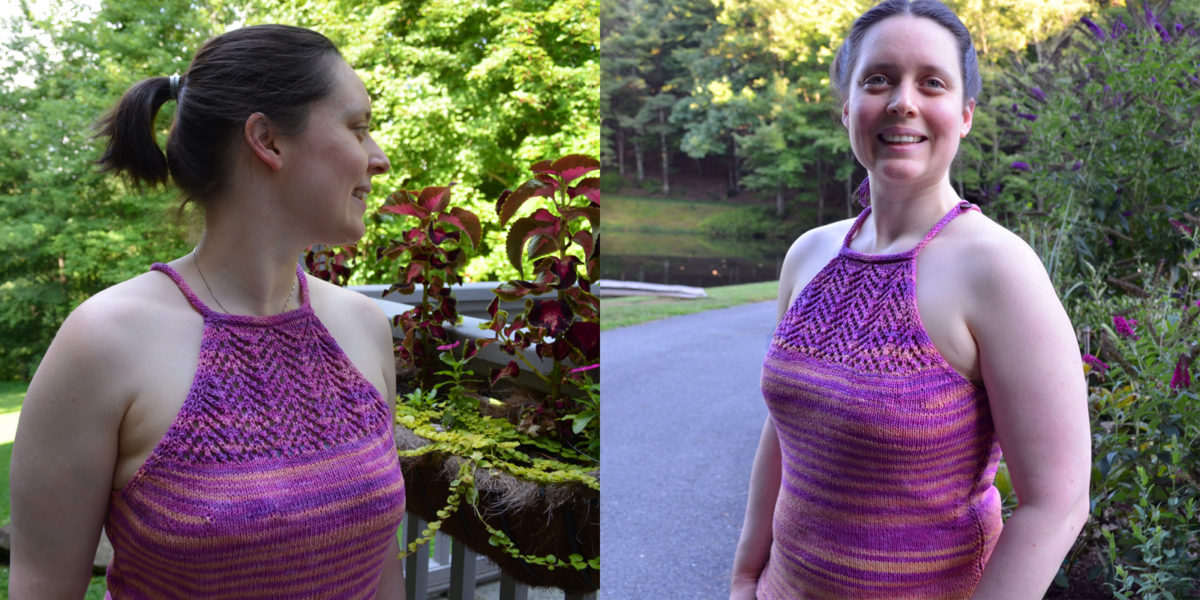 As we move towards release 100, I’m excited to announce it will be a sweater! This sweater is my class project from Jill Wolcott’s “A System of Grading” course (from two years ago). As we knit towards the milestone, I’m thrilled to share some of the things I learned in Jill’s class. Cultivation is a perfect example of when math and design cross wires! Cultivation went through an interesting design development and makes me thankful for the 3rd party people involved in the design process – both tech editors (TE) and review knitters.

Confession, I’m a 38” bust, but have areas where I don’t always match up to the standards for a 38”. Most of the time it isn’t noticeable… then I knit a halter! Though I’m broad shouldered, I’ve got less than standard length and width across my upper back/ upper chest. It’s sort of like being a squished hourglass between shoulders and bust ?. In my standard design style, no one sees this! But try a halter… oh my!

The question then became, is it me or the pattern? Chatting with the tech editor, the grading worked. The math said “I’m within a good range for the underarm”. But garment design is both math and art and the art side of me felt twitchy about it. Did the pattern need an edit? Or was it just a result of a model not matching up?

Enter phase two of pre-release – review knit. A huge “thank you” to my review knitters who submitted underarm shots so I could see just what was going on under there!

After getting the feedback from my review knitters, I did end up making a pattern change to the halter lengths written. Back to TE it went. The math said “yes” again – I was still in a good range for the underarm.

Before the original TE, I put in directions for customizing the halter as I knew that bodies are as different as paints on a palette. So, whether you prefer a longer or shorter halter, don’t worry, I kept the “customizing” directions in the pattern ?. The benefit of top down knitting allows you to try it on after the join in the round to verify the fit will be perfect before you finish! (Remember, if your swatch changed between needles and blocking take that into account, as well as the fact the body of your knit will act as a little weight pulling the halter down.)

The final edit… snip, snip!
Prior to the official photo shoot my sample was changed to match the new pattern. Yes, there was no way I was wanting to frog all the way up, so I brought out the scissors! View the process at your own shocked pleasure ?.

(The main save… to prevent having to mock the stitch design while grafting, I cut it on an even numbered row!)

So, a big “thank you” to both TE and review knitters. Happy knitting!